I’ve been spending over half of my time at Liverpool since autumn 2016 while I complete my studies at university here, and one thing I had never managed to do in that time was visit a beach up here. Well, no more! Last Monday, I and two housemates hopped on a train to Formby Beach.

We actually hopped on two of the same train, in the end – we didn’t realise that you have to go one stop further than Formby, to Freshfield, to get to the beach at first… the nice man at the station told us we were one stop short!

The beach was about a kilometre’s walk from the station, which was pretty much in one straight line down the road, and then we walked in through the National Trust entrance. We hadn’t really looked up what was at the beach before going, having heard by word of mouth that it was good, so it was a nice surprise to find out how much forestry there was around it.

The photo above was from the side of the car park. It was a beautifully sunny day, which was a bit of a surprise – it was far warmer than the forecast had predicted! On the opposite side of the car park to these trees, however, there was an ice cream van situated by a sign pointing towards the beach. After a quick stop for my friends to grab an ice cream each while I took photos, we dutifully ambled past the sign and into the trees.

It turned out we took quite the nature walk before arriving at the beach! There weren’t really any signs once you got into the forest, although after about ten minutes, we did find a fallen tree by the side of the path, on which was painted ‘BEACH’ with an arrow pointing to the left. With my friends busying themselves with their ice creams, they basically followed my lead as I assumed that as long as I followed the fence, we’d probably arrive at the beach at some point…

… and then I got Google maps out when they lost faith in my leadership. But we were going the right way! We just needed a little assistance at the end.

We emerged from the trees into a series of sand dunes, which I won’t lie, got me a bit excited. As a former geography student whose field trips were largely situated on beaches with sand dunes, it had been a while! I got very picture-happy and sort of rushed off ahead, both in search of the actual sea and just because I felt like it. My friends did decide to call me Dora (the Explorer) for the rest of the day, though…

In the distance, we could see the wind turbines from the Burbo Bank offshore wind farm. I know some people don’t like them, but I really do – both because of the clean energy they produce, and because I think they look quite serene. They could definitely have designed uglier turbines, that’s for sure.

We’re fairly certain the land mass we could see in the distance to the left, some distance behind the wind turbines, was Wales, and according to the GPS on my phone, we were actually directly across from Dublin. (Couldn’t see it, of course, but it was nice to know.)

We put our towels down on the flat sand at first to eat lunch, because we were all really hungry by then, but we were on the north west coast of England, so there was a fair amount of wind chill! So, once we’d eaten with the sea view in front of us, we retreated back into the dunes so we were protected from the wind a little more.

At this point, none of our phones had any signal, which was a bit of an odd sensation considering we weren’t that far from civilisation. But seeing as we’re all arts and humanities students, we’d all packed a book each to take with us, so we spent a good few hours switching between reading and chatting (and, in my case, wandering up and down the dunes). 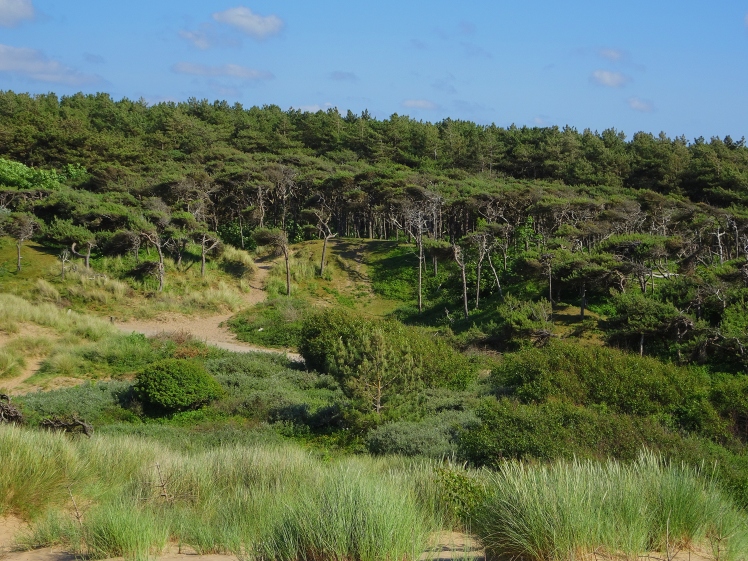 Around half four in the afternoon, we decided we probably ought to start heading back from the beach in order to find food. We weren’t exactly sure on which direction we had come from, so we proved just how youth-in-the-21st-century we were and had to rely on the GPS telling us which direction we were facing while I led us to the car park – at which point, we discovered a far easier route to/from the beach than the one we’d taken! But what’s life without a bit of adventure?

All in all, it wasn’t quite what I’d expected from my first time visiting a northwestern beach in England. I had harboured suspicion that there’d be more touristy shops like the ones you’ll find at many south coast beaches, where you can get buckets and spades etc., but I suppose that’s unlikely at a National Trust reserve! And I’d also expected rather worse weather and rougher tides, though I’m sure on a day with worse luck that’s probably what you would find… What actually happened was that I got very sunburned feet.

So that’s that! I leave you with this: it turns out northwestern beaches in England can actually be far more pleasant than you might expect, and never put your sun lotion on while wearing socks unless you’re 100% certain you won’t be taking the socks off.

2 thoughts on “My First Time at a Northwestern Beach!”